We went to the EMP for a party thrown by the company that Shan works for. Shan & I thought we’ll complete the Scavenger Hunt. We abandoned it due to hunger and ‘thirst’.

Prakash (college-mate and friend) and I went to the dance floor. I trampled several people’s feet in the hyper.

A pic after we got home: 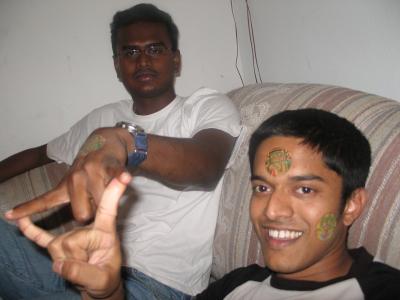 Badly in need of a haircut I guess.

Then enjoyed ‘Harold & Kumar’ (again) and ‘Guess Who?’. Slept on the couch, pretty much like a dog.

Yesterday we saw ‘Final Destination’ (where they hack death) and ‘Ghajini’ (Tamil movie - in a theater). Although ‘Ghajini’ is nothing but a watered down version of ‘Memento’ - and that too played straight, I liked the jokes and the songs. They have indeed indigenized well.