I started playing racquetball in 2003, when I moved to Seattle from India. Sudhakar, my roommate then, taught me how to play. I fell in love with the game right away. I've played on and off since.

It's one of those things that always made me feel great aferwards, but somehow I didn't do it as often as I'd have liked to. Why didn't I do something that was good for me, cleared my head, and was guaranteed to make me feel great? Getting someone to play with you often feels like herding cats, and my own schedule was often up in the air. This is why playing with roommates is great, as it removes one of the biggest obstacles. You're both hanging out in the living room and you can decide then and there to go play, and leave to the gym in the next five mintues. I played a fair amount when I was roomates with Nick, and then Dru. That was great. But we stopped when we moved away, as scheduling became a hassle again. It didn't help that the Palo Alto YMCA where we used to play closed down.

When I moved to San Francisco I didn't have anyone to play with. I got a few friends go a couple of times, but they were total noobs and weren't that enthusiastic either. My work life got pretty hectic too, so I simply stopped.

Then I took a break from consulting to work on my ideas. This was a bit stressful, to say the least, and I needed to clear my head to stay productive. Scott and I were hanging out sometime Oct last year, and we were discussing productivity techniques. We both related how intense aerobic exercises always made us be more productive. Scott always works super hard, so getting him to play regularly wasn't something that had even crossed my mind. But then I saw how I could pitch it to him as a net positive, where if he were to put in n hours into racquetball, he'd get n+m hours of higher productivity.

We played a few times and he picked it up really fast. It was so much fun that we started playing every week. Scott's gf at the time asked me in total disbelief "How the hell are you getting Scott to do something with you every week? What's your secret?" I didn't try to get him to do anything. He just liked the game.

I had suggested racquetball to Alan a long time ago, but he didn't seem interested then. After Scott and I started playing regularly, he soon got interested as we kept telling him stories of how much fun it was. He became good really fast. He's a natural.

The three of us started playing cut-throat and this was a lot more fun than one-on-one, because at any time two people can laugh at the silly that the third person did, like not being able to dodge their own serve.

I wasn't sure how consistent we'd be able to play, since all of us had massive workloads. When Alan and Scott started watching racquetball videos on Youtube, I knew they were hooked. Both of them play really well now.

One day we played three hours of racquetball, went swimming, sat in the sauna, showered, biked to Japantown, and had unlimited Korean BBQ. That was a fantastic day. 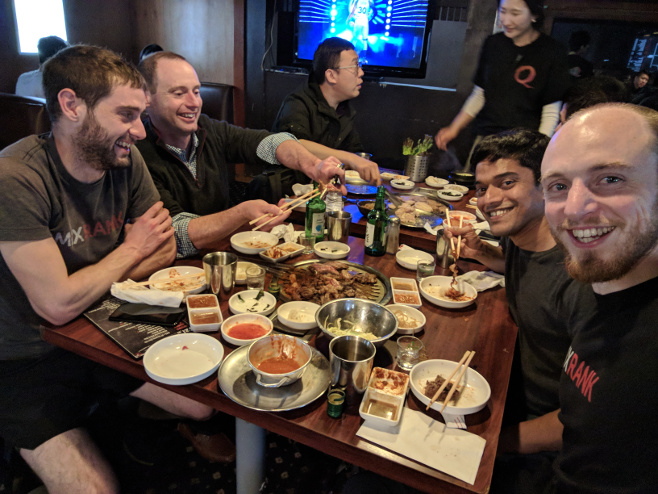 Then we talked Rob into trying racquetball. He came to the gym with an exit plan. He said that he can play for an hour max. We ended up playing for three hours. Then we talked him into sitting in the sauna. He kept saying how incredibly fun that was, laughing and shaking his head as if he still couldn't believe it. He said "so you guys do this every week?!" The clincher was, we went to Smokestack BBQ in Dogpatch afterwards and ate an incredible amount of brisket. He left four hours later than he had planned.

He even researched and bought tournament-grade goggles. He's addicted now.

We've since found a more convenient Mediterranean restaurant next to our gym: 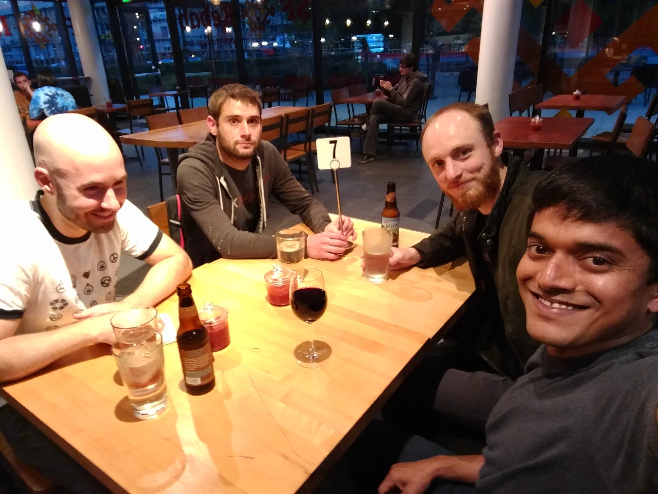 Since we started playing, Alan has had a baby, Scott has been overworked as always, work has been intense for Rob, and I've had months of 12 hour workdays, and yet we've managed to meet up and play racquetball. It is a great way to reset.