Book : For We Are Many 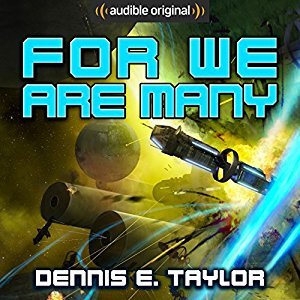 I loved this second book in the series as much as the first. This is unusual for a trilogy. Usually the second volume is a slog with all the effort focussed on setting things up for the big climax in the final volume. Sure, this book wasn't entirely an exception to that, but there were still a lot of interesting things happening.

The part of the story dealing with super intelligent humans descendents helping primitive but sentient life is particularly interesting. While the Ancient Astronauts idea itself is cool but not novel, this version makes it more relatable.

I liked it even more because I enjoy mythologies with flawed gods like in Hindu, Norse, Greco-Roman, Egyptian and other old cultures. You could argue that a truly omnipotent and omnipotent God with no constraints whatsoever is not only dull and boring, but is actually evil for letting bad things happen. Flawed gods on the other hand are trying their best.

The real reason I like mythologies with flawed gods is that you can learn a lot about the culture of the people at the time. The gods are made to struggle with the culture's moral quandaries. What those people considered to be the correct answer to a tough question is usually codified into how a scenario plays out in a myth.

You may like God Is Flawed. Fair warning: It is a TVTropes link; you might end up spending a lot of time reading all kinds of related things.

I'm looking forward to enjoying the next book in the series. I've already started to read it. I usually interleave fiction and non-fiction books, but this series is too interesting for that.

Bob Johansson didnt believe in an afterlife, so waking up after being killed in a car accident was a shock. To add to the surprise, he is now a sentient computer and the controlling intelligence for a Von Neumann probe. Bob and his copies have been spreading out from Earth for forty years now, looking for habitable planets. But thats the only part of the plan thats still in one piece. A system-wide war has killed off 99.9% of the human race; nuclear winter is slowly making the Earth uninhabitable; a radical group wants to finish the job on the remnants of humanity; the Brazilian space probes are still out there, still trying to blow up the competition; And the Bobs have discovered a spacefaring species that considers all other life as food. Bob left Earth anticipating a life of exploration and blissful solitude. Instead hes a sky god to a primitive native species, the only hope for getting humanity to a new home, and possibly the only thing that can prevent every species in the local sphere ending up as dinner.
Average Rating: 4.42 / 5
9 pages
Source: Goodreads